Hand September 9, 2020
One more shared meal is behind us, and a precedent has been set for me. Among the recipes offered, they were, as always, one sweet and the other salty – I chose salty !! I know … and I’m still wondering about it, but I wanted to try something new. And I’m really glad, the recipe is great, and I can even say versatile – an appetizer, a snack at work, a delicacy for a picnic, and in my case it goes hiking. 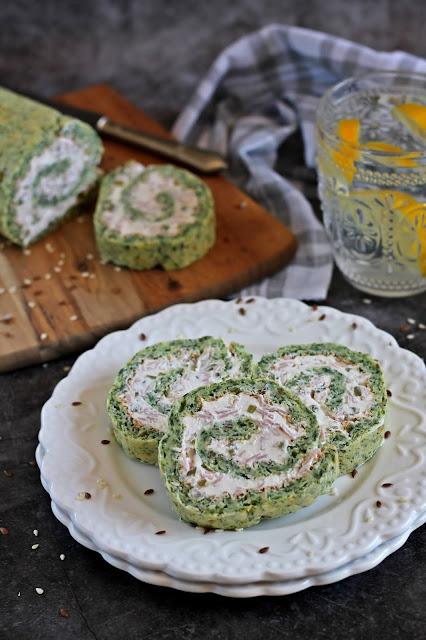 Biscuit
Cook the frozen spinach briquettes in boiling salted water for 4 minutes, drain well and allow to cool. Mix the egg whites into a stiff batter. In another bowl, mix the egg yolks briefly. Add spices, spinach and liquid yogurt. Grind the seed mixture and add to the mixture, along with the baking powder and flour. Mix until combined. Stir in the egg whites lightly with a fork using a fork. Pour the mixture into a large baking sheet lined with baking paper. Bake for 15 minutes in an oven preheated to 180°C. Place the baked biscuit on a kitchen towel, wrap in a roll and allow to cool. 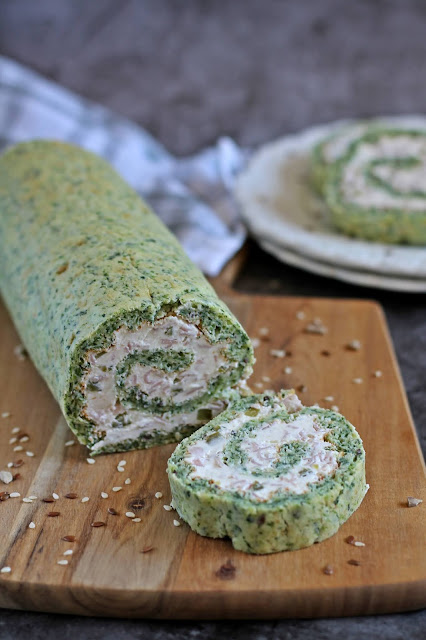 Stuffing
Finely chop the ham and cucumbers. Mix cream cheese and sour cream and season to taste. Add ham and cucumbers. Roll out the dough and remove the baking paper. Spread the filling evenly and wrap tightly. Refrigerate for a couple of hours.